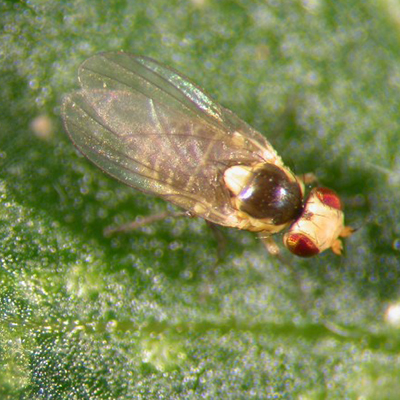 Adult female leaf-miners produce characteristic feeding marks on leaves, and lay eggs into some of these. The solitary larvae of these flies feed within the leaf, leaving trails or ‘mines’ which grow rapidly in length and width. In serious cases the leaf area is reduced enough to affect crop yield, whilst in ornamental crops the damage is highly visible and results in loss of value.

The adults of the four Liriomyza spp. are very difficult to distinguish from each other, being predominantly brown with a clear yellow spot on the thorax. The larvae of L. trifolii are uniformly yellow, whereas the other Liriomyza species are white with a yellow front end. When mature, the larva emerges from the leaf through a slit in the mine, and forms a puparium which is initially pale but which becomes dark brown. Some of these pupariae will remain on the leaf surface, but others drop to the ground. L. huidobrensis is recorded from several hundred species of plant.Phytomyza syngenesiae is a larger species which is predominantly grey, and lacks the yellow spot on the thorax. Larvae do not emerge from the leaf, but form the puparium within the mine made by the larva. This species mainly attacks plants in the family Compositae.
Duration of development of Liriomyza bryoniae at fixed and fluctuating temperatures. From Minkenberg and Helderman (1990)