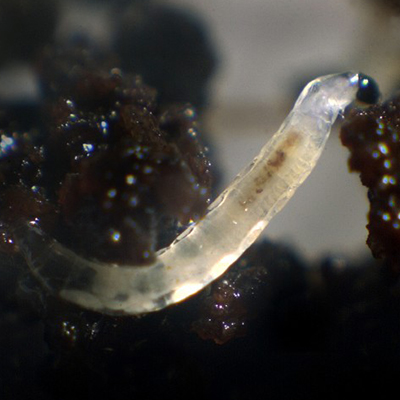 Several species of Sciarid Fly can cause problems, but the most commonly encountered seems to be Bradysia paupera. The related Lycoriella spp are also known as pests in mushroom cultivation.

Adults are commonly seen around potted plants in the home and in offices, where they are sometimes mistaken for midges. In nurseries they can be seen hovering in small clouds above prominent objects, especially where there are wet areas. They can occur in the same areas as Shore Flies (Scatella spp) which feed on algae, and Moth Flies (Psychodidae).

It was thought that the flies were merely a nuisance and did not cause significant damage, arriving only when an existing fungal infection produced suitable food for the larvae. It has now been confirmed that the adult flies are responsible for the spread of some fungal diseases of plants.

Eggs are laid into moist soil or organic debris. The larvae are translucent white with no legs and a distinct black head, and about 1 cm long when fully grown. They feed on fungi and decaying plant material, but will also feed on live plant roots, and can burrow into the stems of newly taken cuttings of plants such as Poinsettias.