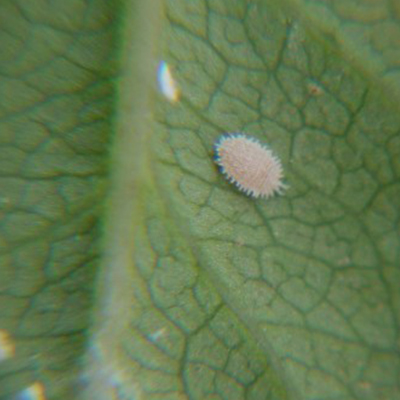 Mealy bugs are insects which are covered with a white waxy powder. They feed in groups by puncturing the leaves and sucking out a meal of plant sap. They secrete honeydew that can lead to secondary disease infections such as sooty moulds. Males have a single pair of wings and fly to spread their populations. Mealy bugs feed on a variety of plants such as ornamentals, cut flowers, vines, citrus, tomatoes and peppers.

The increased adoption of integrated control in protected crops has resulted in mealy bugs becoming an important secondary pest. This is due to the fact that the use of broad spectrum insecticides that had a side effect on mealybugs has been replaced by the use of more specific insecticides and biological controls.

Control strategies for mealy bug usually include more than one control measure, such as the generalist mealybug predator Cryptoline (Cryptolaemus montrouzieri) used in conjunction with a species specific parasite such as Anagyrline (Anagyrus pseudococcus).

Any cookies that may not be particularly necessary for the website to function and is used specifically to collect user personal data via analytics, ads, other embedded contents are termed as non-necessary cookies. It is mandatory to procure user consent prior to running these cookies on your website.