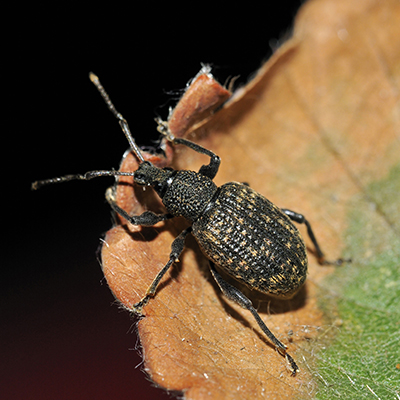 Adults of this beetle are about 1 cm long, and light grey-brown in colour with paler marks. They cause a characteristic notch in the leaves of ornamental plants when they feed. The beetles are nocturnal, and hide during the day, so that damage is often apparent even when no beetles can be found. All adult beetles are female and flightless: males are unknown.

The principal damage is caused by the larvae, which feed on plant roots. Heavy infestations can severely damage the roots of fruit crops such as strawberry, ornamental plants such as Primula and hardy shrubs and trees such as Choysia and Taxus.

Adults lay eggs close to the roots of plants, and the young larvae which hatch begin to feed underground. Light infestations are tolerated, but in heavy infestations enough of the root mass is consumed to reduce plant growth or result in death. Mature larvae are characteristically C-shaped, and are shining white with a distinct brown head. Movement is sluggish, but they will burrow back into the soil if disturbed.

The majority of eggs are laid during August, and young larvae hatch and begin to feed during September. They become active again as soil temperatures rise in the spring, and complete their development and pupate during May and June. It is now known that many of the adults are long lived, they can survive winter conditions and begin to lay eggs during the spring. Thus larvae of various ages can coexist on plants.

Control is normally achieved with entomopathogenic nematodes such as Steinernema carpocapsae and Heterorhabditis spp. These are capable of infecting and killing larvae at soil temperatures above 12-14° C. Larvae can become active and feed at lower temperatures, so in spring conditions where soil temperature does not rise above 14° C, larvae can continue to grow and cause plant damage. This limitation has been largely overcome with the introduction of the cold tolerant nematode Steinernema kraussei, which remains active at temperatures as low as 5° C.

The larva of the Vine Weevil becomes darkened when infected with nematodes.